What is LED backlight module?

LED modules are widely used in LED products, and there are also many differences in structure and electronics. The simple one is to use a circuit board and housing equipped with LED to become an LED module. For the complicated ones, some controls are added. Constant current source and related heat dissipation treatment make the LED life and luminous intensity better. Do you know the LED backlight module? Let us continue reading to learn more about LED backlight modules.

This passage is going to talk about the followings of LED backlight module:

(1)What is LED backlight module?

(2)Where are LED backlight modules used?

(3)What are the advantages of LED backlight module?

(1)What is LED backlight module?

The LED module is composed of a light-emitting diode quadrilateral module integrated with multiple rows and multiple columns. At least one side of the quadrilateral module is an edge with more than one set of concave-convex groove blocks. The quadrilateral module may have at least one set of concave-convex groove blocks on opposite sides and both walls. Among them, the two opposite sides of the concave-convex groove blocks can be corresponding or symmetrical. According to the color type, it can be divided into single-color, seven-color, dual-color, and full-color single-point control. The 12V low voltage module is more common. When connecting the power supply and the control system, you must check the correctness of the voltage value before powering on, otherwise the LED module will be damaged. The normal working temperature of LED is usually between -20℃～+60℃. This parameter is very important if you want to use the LED module outdoors. Usually, it is best to achieve IP65 in the open air, but it cannot be completely waterproof. 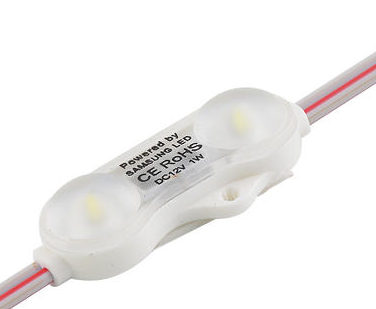 (2)Where are LED backlight modules used?

The LED module is mainly used to display the night effect of advertising fonts (acrylic, blister) and logos. It uses text or logos as a medium and is installed on the roof or wall of buildings. It can not only show the daytime effects of logos, but also use LED. As a light source, it exhibits another effect at night. Equipped with LED lighting application control system, it can realize dynamic video control of text or logo. In some places with a strong entertainment atmosphere, LED light source modules have become one of the most important choices for companies to show their self-image.

(3)What are the advantages of LED backlight module?

Long working life: As a solid-state light-emitting device with conductor, LED has a longer working life than other light-emitting devices. Its brightness half-life can usually reach 100,000 hours. If LED are used to replace traditional car lights, their lifespan will be much longer than the life of the car body, and they will not need to be repaired or replaced for life.

Low power consumption: LED is a low-voltage working device, so under the same brightness, power consumption is minimal, which can greatly reduce energy consumption. On the contrary, with the future development of technology and materials, it will have higher luminous efficiency. People have calculated that if all the lighting fixtures in Japan are replaced by LED, two large power plants can be reduced, which is very beneficial to environmental protection.

Fast response time: LED generally can respond within tens of milliseconds, so it is a high-speed device, which is beyond the reach of other light sources.

Small size, light weight, and anti-attack: This is the inherent characteristic of semiconductor solid-state devices. Therefore, LED can be made into various clear and delicate display devices.