You can hide them so that the LED strips and highlights themselves remain hidden. If you can see the bright spots, the beautiful effect of indirect lighting will disappear immediately. Single color LED strip lights are widely used in coves and hotels, and the effect is very good. The LED strips are placed hidden from the sight of the cove, creating beautiful lighting effects from invisible light sources. Because the LED strip contains many light spots per meter, the light distribution is uniform and will not be blocked as when using TL. You can also use LED strips in many places in the kitchen. For example, as indirect lighting for countertops or lighting in and under cabinets. Usually, a combination of white, cool white, blue and red LED strips is used for aquarium lighting. Blue and cool white are very suitable for night lighting, and white is very suitable for daytime lighting. But you have to make sure to use waterproof LED strips or LED strips! 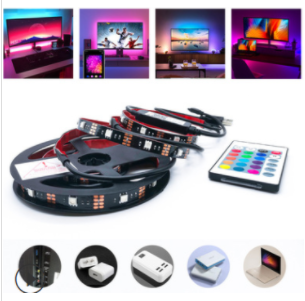 (3) What can RGB colors LED strip lights do?

RGB colors LED strip lights are very popular due to their energy saving and low cost. They are usually used as standard strip lights or as output effects for the audience. These lamps usually have a variety of DMX modes to choose from. The simplest mode allows the entire unit to be used as a single color mixing fixture. On the other hand, the most complex mode can directly control each LFD in the device. Of course, there are various other modes to control different LED blocks (or units) in the light strip. The programming of these units actually depends on the mode they set. In most cases, you need to patch each cell separately and then control them as the only "fixture" in the console. Most modes also provide general or dominant intensity for each cell, which can be helpful when constructing intensity effects between cells.

A good programmer can create various dynamic tracking and effects between units, and then clone this information into a large number of fixtures. They can also design various color changing lighting effects by using RGB colors strip lights.